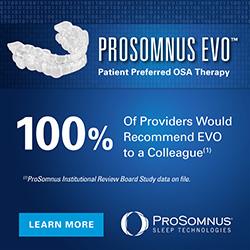 The Prevalence of Pediatric Dentists Who Screen for Obstructive Sleep Apnea

To estimate the prevalence of screening for OSA by pediatric dentists associated with the American Academy of Pediatric Dentistry (AAPD).

Members of the AAPD were solicited to participate in an online survey. Associations with demographic characteristics were tested using logistic regression.

These data demonstrates the need for pediatric dentists to become more aware of OSA screening methods, and the screening tools need to be improved so that they may be applied more accurately and confidently.

Pediatric obstructive sleep apnea (OSA) is a disorder characterized by repeated episodes of upper airway obstruction during sleep lasting for more than two usual respiratory cycles. This results in apneas (breathing pauses, shallowing breathing episodes, and respiratory effort-related arousals) all of which lead to interruptions in sleep.1 OSA most commonly affects children between the ages of 2 to 7 y, an especially critical time for growth and development.1,2 The consequences of untreated OSA in children are myriad, with some of the more common including failure to thrive, enuresis, attention-deficit disorder, behavioral problems, daytime sleepiness, and poor academic performance.2 Additionally, OSA places a burden on the cardiovascular system due to “acute increases in blood pressure and arrhythmias associated with apneas and intermittent hypoxia,” which can have harmful and lasting effects as children grow.1

The importance of screening children for OSA cannot be stressed enough. It has been estimated that 82% to 93% of adults with OSA remain undiagnosed.3 Likewise, OSA has recently been recognized as one of the most common and underdiagnosed chronic childhood diseases.4 The alarming increase in childhood obesity over the past few decades has been associated with an increase in the prevalence of OSA from a stable 1% to 4% to as high as 19% to 61%, increasing the importance of OSA screening in children by health care providers.5

Pediatric dentists can play an important role in the screening of OSA. Because adenotonsillar hypertrophy is the most common etiology, the simple recognition and documentation of the size of the tonsils during a head and neck examination can lead to a referral to the patient’s primary care physician or a sleep specialist.1,2 Physicians may not always recognize childhood OSA and there is evidence to support a delay of up to 23 mo between identification of a pediatric patient with large tonsils and referral of that patient to a sleep clinic or laboratory. As stated by Padmanabhan et al., because pediatric dentists are more likely to identify adenotonsillar hypertrophy than physicians, pediatric dentists could be the gatekeepers in screening children for OSA.1 Although there is ample research on treatments and screening methods, there is no research on the prevalence of screening among pediatric dentists.

The primary aim of this study is to determine the prevalence of pediatric dentists who screen for OSA and to identify what methods they use in their screening process.

This study was approved as exempt by an Institutional Review Board (IRB: #HM200003462). An email invitation was sent by a third-year dental student as a part of the research project in December 2015 to approximately 5,500 pediatric dentists who were members of the American Academy of Pediatric Dentistry (AAPD) asking them to participate in a survey using the REDcap (Research Electronic Data Capture) survey software. The email invitation asked members to participate if they had practiced dentistry within the past year and that participation would be greatly appreciated, but is completely voluntary and will remain anonymous. No compensation was provided for participation. A respondent was required to be a practicing pediatric dentist to be eligible for inclusion in the analyses.

The questionnaire consisted of a demographic section (years in practice, dental school, practice specialty, practice setting, practice location) followed by a series of questions regarding screening methods, preferences, referrals, and treatment modalities. Three primary screening modalities were considered (medical history, sleep questionnaire, and anatomic parameters) as well as three additional modalities (cone beam computed tomography, home sleep test, two-dimensional lateral cephalogram) and other modalities. The preferred modality was recorded, as was the percentage of patients routinely screened and the level of confidence in screening. Referral behavior and treatment services were recorded in the final portion of the questionnaire.

The primary outcome variable was whether any screening for OSA was reported. A positive answer or “Yes” was accepted if any of the primary or additional modalities were reported. In order to identify any geographic associations the five districts of the AAPD were used.6 The district of the respondent’s dental school was used, as was the district of the dental practice location.

Frequency and proportions were calculated for the responses to items on the questionnaire, and the results are reported using 95% confidence intervals. Additionally, logistic regression was used to determine if the demographic factors were associated with screening for OSA. Factors were first screened one at a time and then those factors remaining significant in a multivariable logistic regression using a significance level of 0.05 were reported. SAS software (SAS v9.4, EG v6.1, and JMP Pro 12.2, SAS Institute Inc., Cary NC) was used for all analyses.

A total of 455 dentists responded to the survey, an 8% response rate, but 7 were excluded because they were practicing as general dentists or in specialties other than pediatric dentistry. Although 8% is a low response rate based on the reported demographics of the 448 pediatric dentists and the large sample size, we expect this sample to be representative of the population of pediatric dentists. Table 1 shows the demographic characteristics and indicates a large number of pediatric dentists in a range of locations with a variety of experience. We grouped practice location into North Central, North East, South East, South West, and West. All groups were represented evenly. There were 83% who reported practicing in private practice whereas 9% practiced in academia. There was an even distribution of dentists in practice ranging from less than 5 y to more than 30 y

When asked whether they screen for OSA, more than 70% of pediatric dentists studied reported that they did so using one of the specified modalities (see Table 2 and Figure 1). More than one-half screen using a patient interview (55%) or by identifying anatomical parameters (52%) and fewer than 5% use a sleep questionnaire. In those who use a patient interview, 53% inquire about snoring or pauses in breathing and 47% observe whether mouth breathing occurs. Additionally, 22% inquire about excessive daytime fatigue and 20% recognize high body mass index as a risk factor. Fewer than 9% report observing other aspects during the patient interview. Of those who identify anatomical features, 51% report observing the position and size of tonsils and adenoids. An additional 36% observe the mandible position and size. Among the few that use a questionnaire, the variety of choices—including self-developed forms—indicates no consensus on this modality.

The results show that just fewer than 30% of pediatric dentists do not routinely screen their patients for OSA. This is a significant portion of the pediatric population. More importantly, even among those who do some screening only 40% report screening all of their patients; on average, only 66% of patients are screened. Overall when asked about their confidence in screening for OSA, 72% of pediatric dentists report that they were “uncomfortable” (i.e., 1 or 2 on the 5-point scale, Figure 2). Although it is not surprising that almost all of those who do no OSA screening are not entirely confident, 60% of those who use some form of screening still report some level of discomfort.

There are three main screening methods dentists can use to screen for OSA. First, a dentist could perform a physical examination of the hard and soft palate, specifically focusing on the adenotonsillar tissue. Second, a dentist could use a questionnaire asking the patient or patient’s parent/guardian about their body mass index, snoring, daytime alertness, etc. A questionnaire could be a concise and easy-to-use tool to screen for OSA but currently there is no standardized survey for practitioners to use.7 A metaanalysis showed that only one survey, the Pediatric Sleep Questionnaire,8,9 had the diagnostic accuracy to be used as screening method for OSA in pediatric patients. Though it cannot replace the gold standard of a full polysomnography, it could be a quick and efficient way to incorporate screening of OSA into routine patient care. Last, pediatric dentists could interview the patient, which may provide more information because a one-on-one interview is by nature more personal and intimate.

Some may argue that OSA is outside the scope of care of a dental provider and their role in this area is not clearly defined. However, the primary cause of OSA in children is enlargement of adenotonsillar tissue, which is clearly visible during the head and neck examination.1 Dentists receive extensive instruction on head and neck anatomy and physiology and specialize in this area to a much greater degree than a pediatrician. They are specifically trained to perform head and neck examinations; therefore, OSA screenings could easily be incorporated into the intraoral examination.

According to the National Institute of Dental and Craniofacial Research, the prevalence of oral cancer is 0.0044% in children age 0–19 y.10 In contrast, OSA affects 1% to 10% of children in the United States and has significant sequelae when left untreated.2 Oral cancer screening is part of routine care and the dentist is considered negligent if this screening is not performed during every patient visit. However, it is unknown how many or if any pediatric dentists screen for OSA, even though the prevalence of OSA is significantly higher than that of oral cancer.

Smoking and tobacco cessation counseling was once thought to be beyond the scope of care of a dentist but it has been shown to be effective in practice and is being incorporated into dental schools’ curriculum.11 Smoking directly affects the health of teeth and gingiva and can have significant effects on surgery, healing, and oral cancer risk. As more was learned about these detrimental effects, health care providers began to counsel their patients and explain to them how tobacco can affect the oral cavity. Similarly, as more is learned about the negative consequences of untreated OSA and how the condition remains undiagnosed in many children, the importance of screening becomes paramount. Our results show that more recent graduates (practicing fewer than 5 y) are 2.5 times more likely to screen for OSA than those who have been practicing for more than 30 y, which indicates that OSA is slowly starting to become included in dental school and residency program curricula.

Health care currently is evolving into a personal approach for patients, which is only possible through an interdisciplinary and interprofessional collaboration of dentists and physicians. OSA is an area that pediatric dentists could work in conjunction with other health care providers, such as pediatricians or nurse practitioners, to better serve their patients.

In conclusion, fewer than one-third of pediatric dentists screen 100% of their patients for OSA and an additionally 31% do not screen at all, which is a significant portion of the pediatric population. Furthermore, the majority of dentists report a lack of confidence in screening for OSA and 93% do not provide treatment for OSA. This lack of comfort and confidence in recognizing and diagnosing OSA may be attributed to the fact that dental students receive fewer than 4 h of overall education in sleep disorders, let alone in OSA itself.12 Together our findings and the state of undergraduate dental sleep education demonstrate the need for a standardized approach for screening and for pediatric dentists to become more aware and better trained to help accurately and confidently screen for OSA.