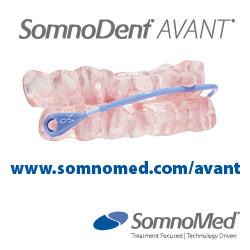 Using a Lingual Frenulum Depressor to Create an Airway in a Patient With Obstructive Sleep Apnea: A New Method

This report presents the case of a patient with obstructive sleep apnea (OSA) whose symptoms improved with a lingual frenulum depressor (LFD) attached to an oral appliance (OA) to noninvasively secure the breathing route. A diagnosis of mild OSA was made using polysomnography in a 25-year-old man (body mass index = 31.1 kg/m2). A monobloc-type OA with an LFD posterior to the lower front teeth was fabricated to depress the lingual frenulum posteroinferiorly. With this appliance, apnea-hypopnea index decreased (12.9 events/h to 5.8 events/h), the 3% desaturation index decreased (9.6 to 5.6), the lowest percutaneous saturation index increased (83% to 89%), and arousal index improved (15.3 events/h to 7.58 events/h). Coronal magnetic resonance images showed no gap between the tongue and soft palate without the OA with LFD, but a gap was present with the OA inserted. We conclude that the LFD created a “crevasse” that acted as a breathing route through the oral cavity by changing the tongue shape. This is a new approach to OSA treatment.

The velopharynx is the most common site of occlusion in patients with obstructive sleep apnea (OSA).1,2 In an experiment in which obstructive apnea was experimentally induced, Isono et al. found that the tongue pushes the soft palate dorsally with inspiratory effort, which results in a narrowed velopharynx.3 This indicates that there is no airway present between the soft palate and the tongue during apneic events. Therefore, although both nasal continuous positive airway pressure and mandibular advancement devices are known to effectively enlarge the constricted retropalatal airway,4,5 “an additional airway through the oral cavity” might help maintain airway patency independent of the occluded velopharynx. Based on this hypothesis, the case of a patient with OSA in whom a newly developed lingual frenulum depressor (LFD) successfully created an oral bypass airway that improved the OSA is presented.

A 25-year-old man complaining of heavy snoring and daytime sleepiness visited our hospital. His height was 170 cm and he weighed 90 kg (body mass index = 31.1 kg/m2), and he had normal occlusion without subjective or objective abnormalities in the stomatognathic system (Figure 1A). There were no past or current temporomandibular joint (TMJ) disorders or motor function abnormalities of the trunk or limbs. In addition, the patient had allergic rhinitis. Based on the results of polysomnography (PSG), a diagnosis of mild OSA was made, and the patient’s apnea-hypopnea index (AHI) was 12.9 events/h. A
mandibular advancement device was then fabricated for routine treatment of OSA in our hospital. However, the patient discontinued its use after several days due to TMJ soreness. Subsequently, we attempted treatment using new methodology. First, in accordance with our hospital’s procedures, a monobloc-type mandibular advancement device was fabricated. Next, posterior to the lower front teeth and parallel to the occlusal plane, an L-shaped (width, 2 cm; right angle, 3 cm) lingual frenulum depressor (LFD) was added to the lower oral appliance (OA) to depress the lingual frenulum posteroinferiorly (Figure 1B and Figure 1C). Finally, the upper and lower OA was fixed (Figure 1D); an edge-to-edge relationship of the upper and lower incisors was achieved that yielded a 2-mm advanced mandibular position. The patient was instructed to minimize tongue movement, to not bite the appliance firmly, and to cease appliance use if any discomfort that prevented sleep occurred.

After 2 weeks, PSG was conducted in the same way. Insertion of the OA with the LFD decreased the AHI from 12.9 events/h to 5.8 events/h. Moreover, this OA revealed that, in comparison to baseline results, the 3% desaturation index decreased (9.6 to 5.6), the lowest percutaneous saturation index increased (83% to 89%), and the arousal index improved (15.3 events/h to 7.58 events/h). To clarify the effect of the OA with the LFD in the pharynx, magnetic resonance imaging was performed. Experiments were conducted under two conditions: with and without the patient wearing the OA with the LFD. On sagittal images, no gap was present in the oropharynx whether the patient was wearing the OA or not. On coronal images, no gap was seen in the velopharynx without the OA, but a gap was present when it was worn (Figure 2A and Figure 2B).

This work was conducted in accordance with the Declaration of Helsinki. The subject received explanation regarding the content of the study, and he provided informed consent for all examinations, testing, and treatment. The patient was advised that following the study, if he desired, a new, standard monobloc-type OA would be fabricated and fitted as treatment. This study was approved by the Ethics Committee of Nihon University School of Dentistry at Matsudo (EC 12-012).

To the best of our knowledge, there is no published literature reporting attempts to relieve OSA by altering tongue shape to secure a breathing route. This simple, noninvasive, and inexpensive method has potential clinical applications, either alone or in conjunction with an OA.

This LFD has two important advantages. First, the LFD is not dependent on the status of the velopharynx (ie, patent or occluded), because the experimentally induced “crevasse” (Figure 2B) between the tongue and the soft palate directly connects the oropharynx with the outside of the mouth. The genioglossus muscle and the inferior longitudinal muscle of the tongue are depressed posteroinferiorly when the lingual frenulum is depressed posteroinferiorly by the LFD. Consequently, the lingual septum caves in, and the base of the tongue becomes rounded. This is thought to create a crevasse in the pharyngeal region of the upper portion of the base of the tongue.

Second, similar to treatment with a tongue position controller, patients with nasal congestion who are likely to cease continuous positive airway pressure and OA use would be good candidates for this simple treatment for the aforementioned reasons.6,7 Patients with temporomandibular disorders, those exhibiting partial or complete edentulism, and those with severe nasal congestion would likely be good candidates for this treatment. In fact, the current patient’s nasal airway was completely obstructed due to rhinostenosis from allergic rhinitis. Absence of a breathing route could lead to treatment failure and reduced adherence to the appliance. Therefore, it was necessary to secure a “crevasse” as a breathing route using the OA with the LFD to achieve a favorable response.

Additionally, there was no soft-tissue discomfort, specifically of the lingual frenulum or floor of the mouth, no mouth dryness or in the TMJ or masticatory muscles, following removal of the new OA after PSG. This is likely because of the appliance being worn with almost no anterior mandibular displacement. Moreover, no damage to the appliance was seen after use. However, long-term use of this device may result in stomatitis of the lingual frenulum, discomfort in the floor of the mouth, and inhibition of tongue movement, in addition to the usual side effects of an OA.8

This case study had several limitations. First, imaging was conducted while the patient was awake, whereas actual usage of the device occurred while the patient was sleeping. Second, only one case was evaluated. However, the results demonstrated that occlusion of the airway can be prevented. In the future, it will be necessary to recruit a larger patient sample to verify if wearing the OA with the LFD while sleeping improves OSA, and to clarify the advantages and disadvantages of its long-term use.

In conclusion, treatment of OSA using this newly developed OA with an LFD changed the shape of the tongue, creating a gap in the throat that allowed the airway to remain patent and improved sleep status.

The Japanese Ministry of Education, Culture, Sports, Science and Technology provided financial support in the form of a Grant–in-Aid for Scientific Research (15K11200). This sponsor had no role in designing or conducting this research. All authors declare that they have no affiliations with or involvement in any organization or entity with any financial interest in this research. The study was performed at the Nihon University School of Dentistry at Matsudo Hospital. All procedures performed in the study involving human participants were conducted in accordance with the ethical standards of the institutional and/or National Research Committee and with the 1964 Declaration of Helsinki and its later amendments, or comparable ethical standards. This study was approved by the Ethics Committee of Nihon University School of Dentistry at Matsudo (EC 12-012). Informed consent was obtained from all individual participants included in the study.