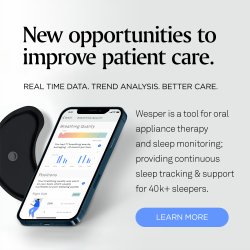 Upper airway stimulation (UAS) using a unilateral implantable neurostimulator for the hypoglossal nerve is a relatively novel option for patients with obstructive sleep apnea (OSA). This may be especially useful to patients who cannot tolerate continuous positive airway pressure (CPAP) or oral appliance therapy. The aim of this study is to describe the use of relatively new technology in treatment of OSA using a fully implanted system by stimulating the hypoglossal nerve, and to evaluate pharyngeal changes in a patient with an implanted UAS system.

Implantable UAS may be considered in patients with OSA who have difficulties with CPAP therapy.

Obstructive sleep apnea (OSA) is a common disorder characterized by repetitive collapse of the upper airway during sleep, resulting in recurrent arousals.1 According to the American Sleep Association, OSA affects more than 12 million Americans, and when left untreated, it has been linked to high blood pressure, heart attack, stroke, and depression.2 Continuous positive airway pressure (CPAP) is the standard of care for treating OSA. Despite the uniform success of CPAP therapy, patient compliance remains a problem. Compliance rates have been reported as low as 54%, making a successful long-term treatment difficult to achieve.2

A relatively novel treatment in OSA for patients unable to use CPAP therapy is upper airway stimulation (UAS) therapy using a fully implanted system. The Inspire UAS system (Inspire Medical Systems, Inc, Maple Grove, MN) is an FDA-approved system offered for the treatment of moderate to severe OSA. This procedure has been shown to decrease the severity and symptoms of OSA in select patients.3

This is the report of a case of a 61-y-old man with a diagnosis of severe OSA, an apnea-hypopnea index (AHI) of 37 events/h, and lowest oxygen saturation of 85% who was unhappy with the management of his OSA. He was claustrophobic, unable to tolerate CPAP and had poor compliance with oral appliances. Previous treatment attempts included two uvulopalatopharyngoplasties, two septoplasties, one inferior turbinate reduction, separate genioglossus advancement procedures, and maxillary-mandibular advancement surgery. The patient used several different oral appliances and a Winx machine (Apnicure Inc., Redwood City, CA). After this series of procedures, a polysomnogram showed that the patient’s AHI was decreased to 28 events/h. Because the results still were not satisfactory, the Inspire UAS system was suggested, and it wassoon implanted to manage the still-existing clinically significant OSA. The patient was part of a clinical trial, with Institutional Review Board approval. Images obtained were part of the study and approved by two hospitals and one institution in the United States. Three lateral cephalograms were taken using the Carestream CS9300 (Carestream Health, Inc., Rochester, NY) at 82 kVp, 12 mA, 0.8 sec, to evaluate the pharyngeal airway changes and the movement of the hyoid bone. The first cephalogram was taken without hypoglossal nerve stimulation (T1), the second one with a stimulation of 1.4 volts (T2), and a third one with a stimulation of 1.7 volts (T3) (Figure 1, Table 1). The measurement of the pharyngeal airway space was performed using seven linear variables.4

Clinically significant changes were seen between T1, T2, and T3 at the oropharynx, hypopharynx, and hyoid bone position. A slight change was also found in the retropalatal length, but no changes were found for nasopharynx and soft palate lengths. The oropharynx length changed from 5.5 mm at T1, to 8.5 mm at T2, and to 9.5 mm at T3. The hypopharynx length showed an even larger change with 14.5 at T1, 17.5 at T2, and 21.5 at T3. The hyoid bone moved significantly both vertically and horizontally, with the horizontal position starting at 33 mm (T1), going to 34.5 mm at T2, and finishing at 36 mm (T3). Vertically the change was upward, moving closer to the mandible, registered as 32 mm at T1, 30.5 mm at T2, and 29 mm at T3. The retropalatal length increased from 6.5 mm (T1) to 7.1 mm (T2), and then to 8.3 mm with the higher stimulation (T3). No changes whatsoever were noticed in the nasopharynx or the soft palate length. Overall superimposition of T1, T2, and T3 (Figure 1) showed the effect on upper airway opening at different levels during hypoglossal nerve stimulation. A sleep study was conducted 5 mo after the UAS was in use, showed the AHI decreased from 28 to 8.5 events/h and acceptable oxygen saturation of 90% was achieved using 1.4 volts. In 1 y the patient reported significant improvement in quality of life.

This is a report of a relatively new option for patients with OSA who are not able to achieve stability with CPAP or more Figure 1—Lateral cephalometric radiograph. Lateral cephalometric radiograph with implanted system, but showing no activation of the upper airway (T1), low stimulation voltage (T2), high stimulation voltage (T3) and cephalometric superimposition on the cranial base including T1 (black), T2 (green), and with higher voltage T3 (red). Table 1—The landmarks and reference lines of the upper airway. Measurement Landmarks Definition Nasopharynx length PNS-PPW1 (mm) Measured as the distance from posterior nasal spine (PNS) to posterior pharyngeal wall (PPW1). Retropalatal length PSP-PPW2 (mm) Measured as the distance between the most posterior point of the soft palate (PSP) and the posterior pharyngeal wall (PPW2). Oropharynx length PTO-PPW3 (mm) Measured as the distance from the mandibular inferior border in the posterior area of the tongue (PTO) to the posterior pharyngeal wall (PPW3), which can be defined as retrolingual region. Hypopharynx length V-PPW4 (mm) Measured as the distance between the base of the epiglottic vallecular (V) and the posterior pharyngeal wall (PPW4). Soft palate length PNS-U (mm) Measured from PNS to the uvula (U). Hyoid bone horizontal position H-PPW5 (mm) Measured as the distance between the most anterosuperior point of hyoid bone (H) and PPW5. Hyoid bone vertical position H-MP (mm) Measured from the most anterosuperior point of hyoid bone (H) to the mandibular plane (MP). Journal of Dental Sleep Medicine 17 Vol. 4, No. 1, 2017 Case Report—Elshebiny et al. traditional options. It is important to include the airway morphology into the orthodontic treatment plan. As healthcare providers, we would be serving our patients better if we could help identifying symptoms and possible options for our patients. Cephalometric analyses may also be useful in identifying potential markers. In the current case report, cephalometric radiographs helped us to evaluate the pharyngeal airway changes. The findings suggest that unilateral stimulation of the hypoglossal nerve, using an implantable UAS system, increases airway area at multiple levels. The position of the hyoid bone could be of significant importance to the craniofacial practitioner, as the hyoid bone is easily identified on lateral cephalograms.5

An implantable UAS may be considered for patients with OSA who have difficulties with CPAP therapy.