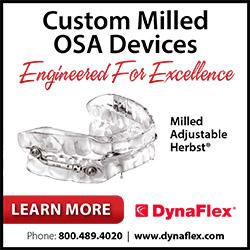 To evaluate the changes that are brought about by continuous use of an orthodontic activator for the betterment of sleep-breathing in a child.

An 8-year-old male who presented with retruded mandible (skeletal class II) and started treatment with the Andresen activator was subjected to at-home polysomnography analysis with a portable sleep monitor as a routine procedure where suspected sleep-disordered breathing signs were first noticed. Radiographic examination showed a slightly narrow upper airway. It was decided to observe this case’s progression with the continuous use of the activator, and periodic at-home polysomnographic retests. Cephalometric radiographs were taken at different periods to evaluate the airway’s width, the physical changes naturally induced by the activator, and its suspected added benefits.

In addition to the planned and expected physical changes delivered by the activator, there was marked improvement on all assessed indicators of sleep-breathing severity.

The Andresen activator not only is a useful and long-trusted orthodontic appliance used for the betterment of maxillary protrusion, it also has a positive effect on other aspects of child development by improving the sleep-breathing patterns of children who undergo orthodontic therapy with this appliance.

It has been generally observed that several conditions, including obesity and abnormal craniofacial characteristics, increase the risk of obstructive sleep apnea (OSA).1 One of the most frequent craniofacial deformities most associated with OSA is maxillomandibular anteroposterior and vertical disproportion,2 which is a result of poor mandibular growth. In children, one of the treatment options includes advancing the mandible forward using fixed or removable orthodontic functional appliances. Recently, it has been suggested that this type of therapy could not only correct the skeletal abnormalities, but could also potentially treat OSA and have a long-term effect that would prevent obstructive events in adulthood.3–5 Therefore, we assessed the effects of one such appliance (Andresen activator)6 on a child with suspected disordered breathing.

An 8-year-old boy (weight 47 kg, height 143 cm, body mass index 23 kg/m2; initial overjet 9.4 mm, initial overbite −3.0 mm) (Figure 1), was referred to the dental clinic at Hiroshima University Hospital. The chief complaint was maxillary protrusion (SNA 82.6°, SNB 73.6°, ANB 9.0). The overjet was excessive and the maxillary incisors were tipped labially. Cephalometric analysis indicated a mandible positioned posteriorly to the maxilla; from these characteristics the diagnosis of skeletal class II malocclusion was made and it was recommended that the patient wear a myofunctional appliance to improve this condition. In addition, from the radiographs the upper airway width was deemed narrow. Furthermore, the parents expressed some concern about the child’s constant snoring. Also, oropharyngeal crowding assessment was made using the Mallampati score, which showed this child was in class III, with only the base of the uvula visible; because a tonsillectomy procedure had been performed prior to the patient’s arrival at Hiroshima University Hospital, tonsil score was 0. At the same time a modified version of the Pediatric Sleep Questionnaire: Sleep-Disordered Breathing Subscale (PSQ: SDB)7 and the Epworth Sleepiness Scale (ESS) modified for children were given to both parents and child, respectively. Initial scores were 0.40% for the PSQ: SDB subscale (the threshold for this scale is 0.33%, with this child scoring high on questions concerning mouth breathing and feeling unrefreshed upon waking up in the mornings) and zero for the ESS scale, meaning this child did not appear to suffer from daytime sleepiness.

The patient was recommended to use the Andresen activator (Figure 2), an orthodontic functional appliance for assisting proper mandible growth, with a mandibular advancement of 6.2 mm at construction bite. As per the hospital guidelines ideal use was recommended to be 10 to 12 hours every day, particularly at night. Two years after initial use of the activator the subject was also provided with a type 4 at-home sleep monitor (Brizzy Nomics, Liege, Belgium) with instructions to use it with and without wearing the activator in the mouth as to properly evaluate the changes that may happen. The data were analyzed with the equipment’s proprietary software (APIOS, Nomics, Liege, Belgium). The provided variables were used as indicators of sleep-disordered breathing severity; these were respiratory disturbance index (RDI), sleep fragmentation index (ARL), cumulative time in respiratory effort (CT), and oxygen desaturation index (ODI). The RDI, ARL, and ODI scores represented the number of events per hour of recording time where the number of obstructive, central, and mixed events per hour of sleep were detected, the number of arousals or discontinuity per hour of sleep, and the times where blood oxygen levels decreased below a delimited threshold respectively, and finally CT, which refers to all periods of abnormal respiratory effort expressed as a percentage of the total sleep time. Three different recordings were recovered (T0 to T2) (Table 1), and from these results the patient was suspected of mild disordered sleep-breathing.

Data recovered from the monitor were analyzed at three time points with 6 months of difference between each, showing that when the activator is inserted in the mouth while sleeping (T1) there is a marked improvement of all indicators of severity and even though the results seen on T2 are still not desirable there is, nonetheless, an improvement when comparing to initial data (T0), (Table 1) which could be inferred to be carried throughout growth.

To fully assess the development of this case, and to further confirm if through use of the Andresen activator the upper airways are truly widened, a series of lateral cephalometric radiographs were taken, which included an amalgam of different analysis used in previous studies of the upper airways8–10 (Figure 3 to Figure 6).

From these cephalometric radiographs the upper airways width (Table 2) was shown to have increased from T0 to T2, thus contributing to better sleep-breathing patterns. Also, the upper airways area seems to have increased slightly after activator therapy. Adenoid size was also measured at two points (T0 and T2) in which a small reduction of its size could be witnessed. The upper airways total area, as seen on the radiographs, showed an increased size, especially the areas delimited as oropharynx and hypopharynx. (Table 2). Serial lateral cephalograms as well as a superimposition of all three points (T0, T1 and T2) can be seen in Figure 7.

It is important to clarify that this patient was selected from a pool of patients who had volunteered to be part of broader clinical research that included only healthy children who share the same characteristics of being skeletal class II and were recommended to use the Andresen activator to improve their occlusal and facial-skeletal discrepancy. The case mentioned in this report was chosen because it showed signs of being worse than the norm for all the other cases examined; thus, it was considered for a longer observation period of evaluation. After the first analysis was done and results explained to the parents, they decided to wait before deciding not to seek a specialized opinion even though they expressed some concern at the beginning of treatment about the child’s constant snoring, of which they noticed a slight reduction from wearing the appliance.

At the time of the final checkup the patient was 12 years old (weight 53 kg, height 151 cm, body mass index 23.2). Final overjet was measured at 6.7 mm and overbite at 1.2 mm. Final PSQ: SDB score was 0.36%, showing a small improvement in the child’s sleep breathing as perceived by his parents, and a final ESS score of zero, showing that the case, at least concerning daytime sleepiness as perceived by the child, did not deteriorate throughout its observation time.

Despite the mentioned setbacks, this case presented interesting outcomes throughout its evaluation time, with an observed betterment of sleep-breathing that was also somewhat maintained over time. This may be explained as the patient grows the changes brought upon by the activator are maintained, not only in the development of the mandible, but also the widening of the airways.

Even though this case is far from full health, the extended and uninterrupted use of the Andresen activator could not only bring about the necessary changes for a harmonious occlusion, it also may improve sleep-breathing of children undergoing this type of orthopedic therapy.