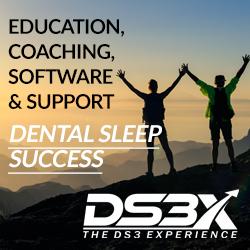 A case report detailing the use of an oral appliance for severely partially edentulous and fully edentulous patents without the need for implants.

One of the challenges faced by the dental sleep medicine clinician is the resistance to continuous positive airway pressure (CPAP) in a patient who is partially or fully edentulous and possibly with limited finances. Dental implants are an excellent option if the patient can afford them, but unfortunately there are many patients who cannot. This report presents two cases, one in which the patient has only three natural lower teeth and a partially edentulous maxillary arch (Figure 1) and the other case in which the patient is fully edentulous (Figure 2). For both of these cases, existing technology was used that allows the oral appliance to be treated as a regular full or partial denture for prosthetic purposes while still maintaining the original triple laminate liner for any remaining dentition.

One of the major issues with fewer teeth is the lack of retention of and stability for an oral appliance. The SR Ivocap Injection System (Ivoclar Vivadent Inc., Amherst, NY) was used to produce an appliance base that could be modified with chairside or laboratory relines or rebases for stability purposes. This injection system controls the heat/pressure polymerization and regulates the exact amount of material flowing into the flask to compensate for any acrylic shrinkage, allowing for a highly accurate fit with minimal appliance adjustment when seated. As the ridge anatomy changes with age and use, the appliance’s inner lining can be easily readapted with chairside relines, soft or hard, for the partially edentulous patient and with chairside or laboratory rebase and relines for the fully edentulous individual.

A 58-y-old female patient with a diagnosis of moderate obstructive sleep apnea (OSA) was referred by her physician of record to my office for oral appliance therapy in May 2016. The polysomnogram (PSG) from July 27, 2014 showed an apneahypopnea index (AHI) of 11.5 events/h, a respiratory disturbance index of 28.1 events/h, and a nadir of 81%. The patient’s Epworth Sleepiness Scale1 score was 13 and Fatigue Severity Scale (FSS)2 was 63. Her prescribed CPAP had been 9 cm H2O but she was unable to successfully use her positive airway pressure (PAP) machine because it interrupted her sleep, the head gear was uncomfortable, her movements were restricted, and the machine was cumbersome. The patient’s sleep schedule was highly irregular with multiple 1- to 3-h sleep periods during a 24-h cycle. She was being treated for attention deficit disorder/attention deficit hypertensive disorder, gastrointestinal reflux disease, hypersomnolence, high blood pressure, chronic obstructive pulmonary disease, fibromyalgia, and bipolar manic depression. The patient’s current medications are Amitriptyline, Fluticasone furoate/vilanterol, Levalbuterol, Lidocaine patch, Lisinopril, Mirtazapine, and Montelukast. She continues to smoke one-half pack of cigarettes a day. Her existing teeth were #5, 6, 7, 8, 9, 10, 11, 12, 21, 22, and 27. The patient had class 2 periodontal disease with normal mobility of all teeth.

The initial bite was taken from the maxillary and mandibular cuspid end-on position. This bite position is a reproducible starting titration point for this patient. Normally an incisal end-on bite position is utilized as a reproducible starting point rather than the George gauge. A maxillary and mandibular impression was taken using a two-part, chemically compatible, irreversible hydrocolloid impression material.

At the delivery appointment both upper and lower appliances were seated with posterior stops placed, creating a three-point balanced occlusion. In creating the posterior stops, more occlusal pressure is placed on the two posterior contacts rather than the single anterior stop while maintaining a balanced occlusion in all excursions. The patient was allowed to sit for 30 min to check for sore spots and verify comfort. Three months after insertion, the appliances have maintained excellent retention and stability and only one sore spot occurred that required adjustment. At the end of the titration period, the patient was referred back to her physician of record for a follow-up in-laboratory dynamic titration. With dynamic titration, the patient’s initial titrated jaw position is determined using high-resolution pulse oximetry (HRPO), and during the sleep study the sleep technician moves the mandible 0.5 mm forward after each rapid eye movement cycle, depending on the patient’s comfort and PSG results. A follow-up PSG showed an AHI of 2.5 events/h and nadir of 89% at 0.75 mm past her starting point (cuspid to cuspid end on position). Of interest was the fact that at 0.5 mm past this cuspid end on starting position her AHI was 31.8 events/h and nadir was 77%. The patient’s final Epworth Sleepiness Scale score was 1 and her FSS was 13. We have placed the patient into our recall system.

This 62-y-old male patient with a diagnosis of severe OSA was seen in July 2016. He was prescribed an oral appliance and referred by his sleep physician of record. His PSG showed an AHI of 33.8 events/h, respiratory disturbance index of 33.8 events/h, and nadir of 86%. The patient was on unpaid medical leave until his OSA was under control. He was being treated for gastrointestinal reflux disease, high blood pressure, ischemic heart disease; he has a cardiac pacemaker, chronic fatigue, hypersomnolence, mood disorder, depression, and intestinal issues. His current medications are Aspirin, Atorvastatin, Carvedilol, Clopidogrel, Fenofibrate, Fluoxetine, Fosinopril Sodium, Omepreazole, and magnesium. The patient is totally edentulous with a minimal lower ridge, and his existing dentures are 20 y old.

Our treatment plan was to make an upper and lower appliance with the metal hardware transferred to denture material. Because of the severity of the patient’s apnea, we would also be using combination therapy with the TAP-PAP Chairside Interface (Airway Management, Carrollton, TX) attached to a loaner autotitrating CPAP unit provided by my office. The patient was instructed not to wear his dentures from the time he went to bed until his appointment. A two-part, chemically compatible, irreversible hydrocolloid impression material was used to take the master impressions. An upper and lower custom tray with wax rims was made to establish the proper vertical and bite positions. The key to this technique is to register the bite without freeway space. Several measurements were taken at the patient’s existing rest vertical dimension by measuring the distance from a mark made on his upper and lower vermillion border. The wax rims were modified so that this vertical dimension is replicated and the bite was taken at an estimated end-on position. The impressions and bite were sent to the laboratory and the injection system was used.

Only minor adjustments were needed when the appliance was seated. At this appointment, posterior stops were placed bilaterally at the most posterior location on the lower appliance to create a three-point balanced occlusion in all excursions. Without the freeway space and with the posterior stops placed, the appliance has mild positive pressure on both units holding it in place while being worn. The TAP-PAP Chairside Interface was also placed during this appointment and attached to an autotitrating CPAP unit with a heated hose. The physician-prescribed pressures were set chairside at 8 to 20 cmH2O. The patient comfortably wore the just-seated assembly for 30 min before being released.

The office protocol is to have the PAP chip download taken after 1 night of usage and forwarded to the patient’s physician of record. In this case, the first night download showed a reduction of the AHI from 33.8 events/h to 3.6 events/h, with an average pressure of 9.8 cm H2O and usage of 8 h 22 min, and 1 min of large leak time. At no time during the night was the denture dislodged, and the patient slept comfortably with it all night. At approximately 2 w HRPO was performed. The results showed a time above 90% oxygen (T90) at 99.2%, mean saturation of peripheral oxygen of 94.5%, nadir of 86%, and normal pulse rate but with elevated desaturation indices at 2%, 3%, and 4%. Performing HRPO with combination therapy is important because a substantial number of patients will have a normal AHI on their PAP download, yet T90 will be abnormal. If an abnormal T90 is found, then the patient is referred back to the physician of record with a recommendation for a pulmonary referral. Ancillary oxygen through the PAP unit has been the treatment of choice for my previous patients. Six weeks after therapy was started, the final PAP download for this patient showed an AHI of 2 events/h with a median pressure of 9.4 cm H2O and average daily usage of 6 h 21 min. The patient’s physician of record decided to utilize the HRPO and PAP download information instead of having the patient undergo another sleep study. The patient has now been able to return to work.

Utilizing this technique will allow for more treatment flexibility for the clinician, patient comfort, longer appliance life span, appliance modification, and a substantial reduction of a patient’s financial obligation since the need for and expense of dental implants can possibly be averted.

This was not an industry-supported study. Dr. Denbar’s private practice in Austin, Texas is totally devoted to Dental Sleep Medicine. Dr. Denbar also serves as an Adjunct Assistant Professor at Texas A&M School of Medicine and is the founder of High-Performance Breathing Technology. No conflicts of interest are known. There was no investigational or off-label use. The work was performed in his private practice.